In conversation with artist Christiane Spangsberg

Danish artist Christiane Spangsberg is stunning the world with her graceful line drawings and paintings. In celebration of her first solo exhibition opening in Sydney this week, we caught up with the artist to learn more about her creative process.

There is an elegance and stillness to a Christiane Spangsberg work of art that is immediately recognisable. There’s a serenity: a calm and a quiet. You look twice, without stopping in your tracks.

This, the artist tells us over coffee and toast at Room 10, is entirely deliberate. (She’s Danish after all, the land of harmonious interiors and seamless integration of art and interior).

“When I started to work I always created for myself what I needed and I wanted,” the 27-year-old explains. “And when I started I couldn’t find something that spoke to me on the wall but didn’t take too much attention from the room so that you wouldn’t look at the nice furniture and design.”

And that’s how Spangsberg got her start in the industry, making works of art for her family members seeking the right kind of thing to fill a gap on their wall.

“My whole life has been [in] art,” Spansberg says. “I can’t remember the first time I drew something, but I remember the feeling of it. The love of it.” 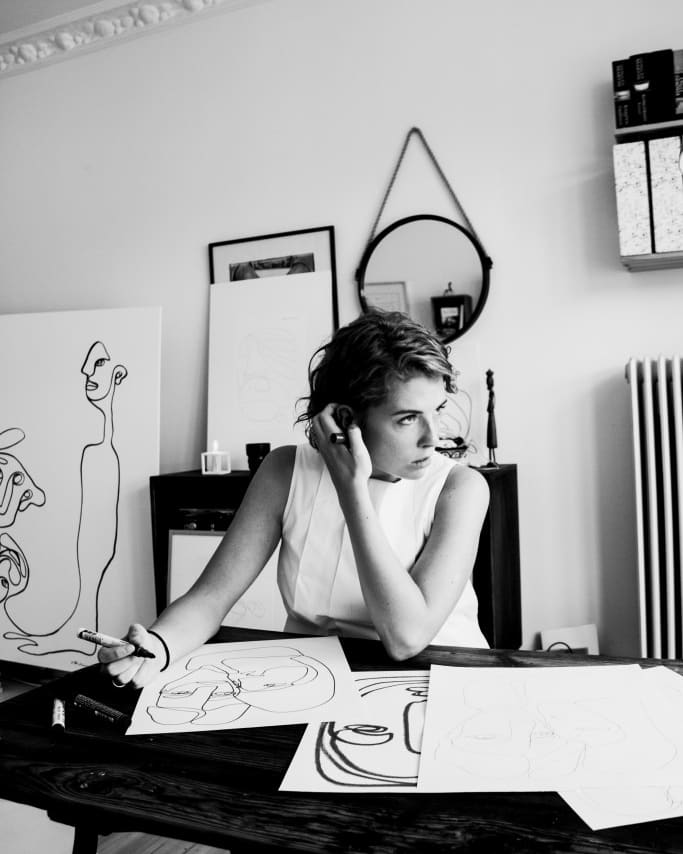 She initially started a childrenswear company after finishing her studies last year. But when a commission popped up in August – a series of 10 line drawings for the dining room at Merivale’s pub-cum-bistro The Paddington – she decided to devote herself completely to art. “That piece,” Spangsberg muses, “did a lot for me.”

What followed included collaborations with Ilona Hamer’s swimwear brand Matteau, profiles in Australian fashion magazines, celebrity fans including Lara Bingle and a solid customer base in Australia emerged. “Sometimes when I think about it, it’s unreal,” she laughs. “At home, I’m not a big thing. People don’t even know who I am.” A solo exhibition – her first – in Sydney at Paddington’s Jerico Contemporary seemed like a logical next step, followed hopefully by exhibitions in New York, London, Paris and Los Angeles.

The inspiration for the exhibition, she explains, was the correlation between the ocean and the female form. Strength intermingled with fragility, and “being naked, being exposed,” Spangsberg says, were the key themes. All of the pieces in the show were created either in Sydney or Bali, where the artist spent several weeks late last year.